The story of Forsyth’s Plaister illustrates that when times are uncertain – whether because of pandemics or our Untied Kingdom’s political acts of self-harm – special government advisors sometimes appear out of the woodwork, attracted by the chance to make money.

(Yes, agreed, we’re not usually very political on this site…but you’ll see where I’m going with this…)

Here is the historical precedents. Let’s go back in time. It’s just after the American War of Independence which Britain had lost. (That was back in the days when the folk on the other side of the pond made sound decisions and got themselves clear of Westminster.)

Britain stood alone. Europe was united against her. Wait, this is starting to sound familiar.

The Dutch, Spanish and French navies were considered a threat to England’s merchant fleet and Napoleon was becoming a real bogey-man.

The Westminster government needed a strong fleet to protect its interests. Back then, warships were built of wood of course. The authorities controlling the Royal Forests went out to inspect their oak trees.

Oh horror! Many of the trees that provided the ‘wooden walls’ – that is, the navy’s warships – were found to be unsuitable for shipbuilding use, because of decay and damage.

So, a threat hung over all that ‘hearts of oak…jolly tars’ Rule Britannia stuff. The stage was set for the appearance of a consultant, an expert. Someone who had spotted an opportunity and a gullible set of politicians.

Enter one William Forsyth (born 1737). He was originally a loon fae the wee toon of Old Meldrum, north of Aberdeen. After working in Lord Aberdeen’s garden at Haddo House, he went to London at age 26. He worked his way to the job of Curator of the Chelsea Physic Garden.

From there he landed the plum job of Director of His Majesty’s Gardens at Kensington Palace. So, he was the chief gardener to King George III.

In 1798, government committee sent for Forsyth, as he was such a prominent horticultural expert. He, meanwhile, had already been promoting an invention of his called ‘Forsyth’s Plaister’, claiming it was the very dab for re-conditioning decaying trees and healing wounds on the bark.

Don’t try this at home. It’s messy and you’ll get a row.

Want to know how Forsyth’s Plaister was made? Right-oh. Take a bushel of fresh cow-dung and half a bushel of lime-rubbish (taken from the ceilings of rooms, ideally). Add a half bushel of wood ash and one-sixteenth bushel of river-sand. The lime, ash and sand should be sifted finely then made into a thick plaster by adding urine and soapsuds.

That’s it. A bushel, incidentally is just over 36 litres. The mixture should be thinly and evenly applied to the tree-wound or infected area. Dinna clart it on.

An inspection committee solemnly trooped round to the Kensington Palace Gardens, where, presumably, Forsyth had rigged up some display or other or healthy, healing trees. Suitably impressed, the committee went up the line to a Parliamentary Committee.

There was a certain amount of to-ing and fro-ing but the upshot was that after further re-inspection the Parliamentarians decided that Forsyth’s claims for the stuff were genuine.

Forsyth was hailed as someone who had invented something of inestimable value to the nation. Get this: he was given £1,500 as a grant plus the promise of the same again when further results were seen.

Back then, that was a lot of dosh for, basically, a pile of doo-doo, and some may even see a parallel to some of today’s government’s special advisors and their ideas.

The publicity helped Forsyth to advertise his wonder cure widely. He also continued to investigate further ways of improving the health of trees. In a way, he had to…as doubts and question started soon afterwards concerning the value of his ‘Plaister’.

He died six years later, in 1804 with controversy still surrounding his treatment for strengthening trees. Knowledgeable gardening folk were aware that his ‘recipe’ wasn’t even especially original and owned much to other ‘traditional’ recipes for helping trees.

Thus the clever bit in Forsyth’s exercise was not only conning a naive government committee but claiming the idea was his alone. Admittedly, there are no records of him receiving the promised second half of his consultancy fees. Still, £1500 at that time would be worth perhaps as much as £70,000 today. Not bad for a load of…

Anyway, it shows the state of mind of the ministers and how worried they were that the country wasn’t going to be able to build navy ships fast enough.

Ironically, many of today’s gardeners say that tree wounds are best tidied to remove any raggedness then left alone to heal themselves. 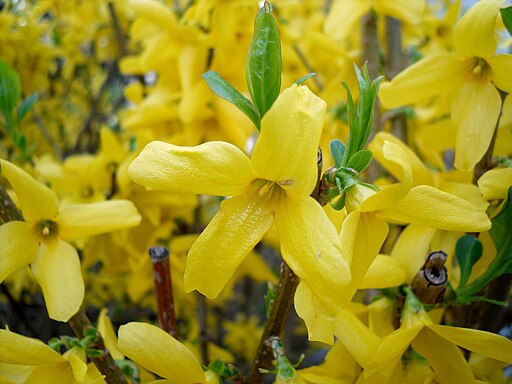 And, yes, he was the gardener who gave his name to Forsythia – that cheery shrub that brightens the early spring garden with its bright yellow flowers.

I have in the past looked after a wall-trained Forsythia (probably intermedia ‘Spectabilis’) Though easy to grow, I sometimes have my doubts that some of the species are quite as hardy as the books make out.

Think carefully about where you site them, preferably away from searing (easterly) winds. Nevertheless, their golden flowers on bare twigs make a great show right at the end of winter. (Here are some more suggestions on this website for winter colour.)

As for pruning, obviously not till flowering is over and you have enjoyed a few weeks of their profuse little yellow bells. Cut out old wood low down and, if you like, shorten some of the flowering wood. But please don’t use any home-made mixtures on the cuts. Certainly nothing with the label ‘Plaister’ on it.

Plus a short glossary of other Scottish words that sneaked in.

Down The Garden Path